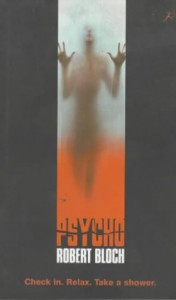 This book is infamous. This was the book that made the film that terrorised a whole generation in the Early 1960's.

She was a fugitive, lost in a storm. That was when she saw the sign: motel - vacancy. The sign was unlit, the motel dark. She switched off the engine, and sat thinking, alone and frightened. She had nobody. The stolen money wouldn't help her, and Sam couldn't either, because she had taken the wrong turning; she was on a strange road. There was nothing she could do now - she had made her grave and she'd have to lie in it. She froze. Where had that come from? Grave. It was bed, not grave. She shivered in the cold car, surrounded by shadows. Then, without a sound, a dark shape emerged from the blackness and the car door opened. Psycho is not a tale for queasy stomachs or faint hearts. It is filled with horrifying suspense and the climax, instead of being a relief, will hit the reader with bone-shattering force.

I loved this book.

I've read reviews saying that Robert Bloch the auhor, May not be a great writer? I totally understand This is his 1st book I’ve read of his But from doing so, I strongly disagree. I think he’s really good. He delivers What is now a classic!

He struck literary gold when he created Norman Bates, An insane serial killer based on what I think is Ed Gein, The infamous murderer who made furniture out of his victims. Bloch writes the chapters from the different points of view of his characters, and the chapters where we get to see the world through Norman’s eyes.

An if not one of THE Original Chillers.