I decided i was going back to the 90s with a retro kind of Horror read!

I was browsing through my local library's Ebook section when these caught my eye. At once I was drawn back to my childhood when I passed whole rows of this series of book's and point horror in the teen section. For anybody who remembers the 90s! From a teenager's prospective. R.L Stine and Point horror were the book's to read for Teen horror. There was ton's of them! And some of them were absolutely terrifying! Goosebumps were more for the younger ages.

It's really good to see that R.L Stine is still Much requested. I chose the fear street saga not really expecting much, but was proved pleasantly surprised! I'm going to give a complete breakdown of The ones I got my hands on in one post.

Cally,Kody,James,Mr and Mrs Fraiser had just moved to 99 Fear street,and the twin sisters weren't thrilled to move in...After their arrival the accidents follow first a tree branch almost falls on cally's head,then the rats attack them,the window panel falls on kody's hand,and other accidents happen...soon the twin sisters are sure the house is haunted or cursed after hearing the terrible story from a boy in their neighborhood.
everything turns more mysterious when the house owner whom they had bought the house is found dead long ago, and strange things keep happening! Infact they get more crazy from there. A Very sad ending that was kind of expected in the end. 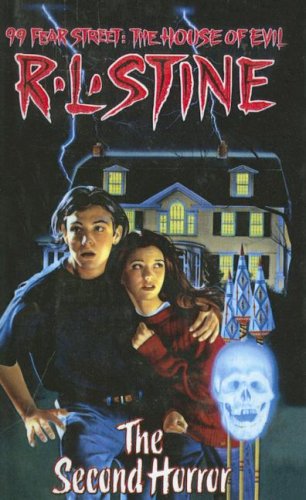 I actually prefer this one to the first one. This house still stands and a new family move in. All sorts of turmoil awakes again and the house and its ghosts are intent on trying to kill the new family!

Kody Frasier, makes a return. She always swore she would come back. And this time she brings a whole Hollywood film team with her! In my personal opinion not as good as they other two, but still a very good read.