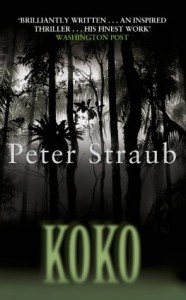 KOKO. Only four men knew what it meant. Now they must stop it. They are Vietnam vets a doctor, a lawyer, a working stiff, and a writer. Very different from each other, they are nonetheless linked by a shared history and a single shattering secret. Now, they have been reunited and are about to embark on a quest that will take them from Washington, D.C., to the graveyards and fleshpots of the Far East to the human jungle of New York, hunting someone from the past who has risen from the darkness to kill and kill and kill.

Whoa! I Know I'm typing whoa when I've read House of leaves but yeah whoa! Koko was a big tome of a paperback 640 pages. I got koko along with 5 other of peter straubs book's that I got. All second hand cause I'm all about giving second hand books loving homes :p

Anyway's, Right off the hook with this book Peter puts you in the story of Four Vietnam veterans that reunite after what has been 15 years after the war, they all made their little ways in the world after the war, but to some of them the war is still very fresh in their minds, and one horror of it, a chain of murders is committed in south Asia. The murderer always leaves a trademark card. And one the four men know well, so well in fact that they think it might be one of their old platoon.

This took me on a roller coaster of a read. When you think you have clocked who the murderer was the plot turns and it's someone totally different. Its a Disjointed, psychological and somewhat confusing array of a tale But one that keeps you hooked throughout it and will keep you guessing until the end.