The Mummy (1912) by Riccardo Stephens

Now available: Riccardo Stephens's incredibly scarce weird mystery THE MUMMY(1912). Two young men have been found dead, their deaths perhaps connected to an ancient Egyptian sarcophagus inscribed with a terrible curse. As the deaths continue, Dr Armiston must discover whether the Mummy is responsible, or if there is some other explanation. Fans of Richard Marsh, Conan Doyle, Wilkie Collins, and Arthur Machen will love this one. Features a new intro by Mark Valentine. 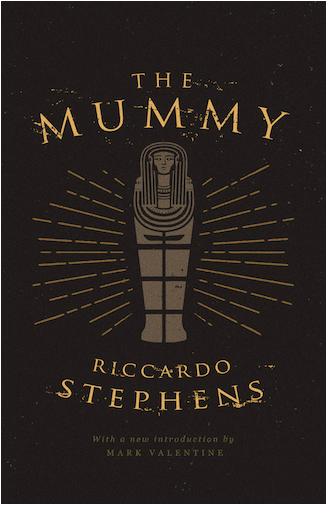 Dr. Armiston, middle-aged bachelor and general practitioner, has his quiet and routine life interrupted when he is called in to consult on the deaths of two young men. One case seems to be a tragic accident, the other the result of natural causes, but they have one strange thing in common: the presence of the same ancient Egyptian mummy case in both men's homes. When Armiston learns that the sarcophagus is inscribed with a terrible curse promising vengeance on anyone who disturbs the mummy's repose, and as the series of deaths continues, the doctor will risk his own life to unravel the mystery and find out whether the mummy - or something or someone else - is responsible.

As Mark Valentine argues in his new introduction to this edition, Riccardo Stephens's exceedingly scarce The Mummy (1912) is a fine piece of storytelling, an inventive weird mystery that bears comparison with the works of Conan Doyle and Robert Louis Stevenson. This edition follows the text of the 1923 Hutchinson edition.