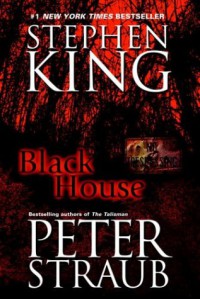 From page one, through to the final sentence, this book had me Hooked!

Jack sawyer is now a man, and a sexy one at that.

"Black House" is the second collaboration between King and Straub, and is the sequel to their first novel, "The Talisman".
If you've read Talisman and if you're one of King's Constant Readers  Black House answers lots of questions like what happened next to the Talisman's characters? who or what is the Crimson King? and it also, Tantalisingly raises lots of new ones, primarily relating to King's Dark Tower series!

However, if you're new to Stephen King, don't worry Black House is also rewarding in its own right, which keeps the reader turning pages as ex-cop Jack Sawyer races to find a young boy kidnapped by a serial killer. Sawyer must fight his personal demons, work with the town's residents and challenge a few bad guys (from this world and others), if he is to save the victim (turns out there could be a lot more at stake too...)
Set in a small Winsconsin town, the novel features some superb characterisation and truly great narration from both legend authors.

As a sequel, I believe "Black House" is superior to its predecessor it's not as firmly set in the fantasy genre. the book has a great plot and fast paced storyline.  just like it's 1st one. King and Straub will have all There readers desperate for more!